I recently launched a colouring book with my buddy Jason Cobill. Here are my findings for our first Facebook ad campaign. Our objective was to raise awareness about our product and we are overall pleased with the results.

Ottawa in Colour  is 32 pages of colourable art prints featuring 22 local artists with their answers to the question “What do you love about Ottawa?“. We commissioned artists with a wide spectrum of styles – animators, illustrators, urban sketchers and more, so each piece reflects the artist’s unique style and vision. See discount code below.

I have to admit I was a bit sheepish to shell out the money for social media marketing out of my own pocket. It’s always easier to ask other’s to spend when consulting since the audience is typically already defined and the organization has been in operation for much longer. In our case, we are still working on defining it since we just launched a few months ago.

Our goal was to target local consumers. Specifically for Facebook ads, it was really inconvenient (a pain!) to select Ottawa. Since Ottawa has a sister city across the river, it complicated targeting because it seems the interface relies on geographic radius. I had to create many exclusion zones to keep the ads on the Ontario side (only 1% of our campaign recipients slipped through the tiny angles on the Québec side). Although the cities’ proximity make it a somewhat similar demographic, our product is city specific and I really wanted to target its citizens as our first market.

I also looked at our Facebook page’s demographics as a base. I took in consideration that some of our friends and family who supported our project (thank you all!) and liked my page were not the typical users. I also had to ensure that we had a big enough pool to advertise too with purchasers on the fringes of enjoying similar activities. 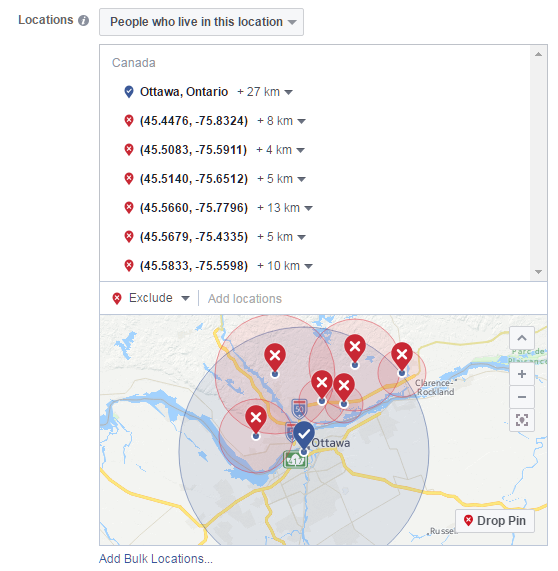 For the sake of comparison, I omitted direct in-person sales. We also didn’t have online sales for the month leading to the Facebook campaign. The fear of a Canada Post strike in the summer of 2016 had an immediate and crippling impact on online sales. Thankfully we had diversified our channels and more stores were carrying our book at this point to compensate for the loss.

After advertising, online sales did not rise immediately at first, but began to be steady after a good week of awareness (an order every second day in average for two weeks.  We don’t know yet if the sales increased in stores since we do not have access to inventory counts or progression. What we do know for a fact is that sales begun shortly after our advertising, it recouped our marketing costs (with a little bonus) and generated the end goal of awareness.

I ensured that to max-out the imagery to showcase the product with contrast between the product (for product recognition), coloured drawings for inspiration and the selection of our gorgeous drawings.

Data time! I extrapolated the Shopify sales and Facebook spending to see how much profit we would pull in. This of course doesn’t take overhead into account. We notice that as soon as the ads stopped, so did the sales. It’s been going on now for a couple of weeks with a lack of online sales (for now). The sales seem to have shifted to store purchases.

We notice from the data that the sales began early, but did not reach their peak until day 20. In hindsight, we should have kept the paid ads going to see how far we can push it.

In terms of engagement, most of it was passive such as shares and reactions. Comments were sparse. We did have a lot of link clicks (in purple on the graph) which was great for conversion.

Only 4 of sales used our Freeshipping discount code

Only 4 of sales used Freeshipping. Although our social media ad brought traffic and sales, it seems our customers mostly just wanted the book. Did they forget about the FreeShipping or willingly opt not to use it to save us a couple of dollars? Who knows. The mention of free shipping was on every page as well as the purchase page. Perhaps there was some tunnel vision to get the book.

If you are curious to learn more about our book and artists, check out www.ottawaincolour.com. Thank you for the read. Perhaps I could interest you in the discount code BLOGHYDRA for free shipping on your book(s) purchase?

This site uses Akismet to reduce spam. Learn how your comment data is processed.